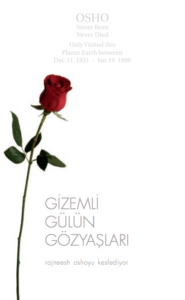 tears of the MYSTIC ROSE turkish ebook – OZEN rajneesh
the spiritual journey of rebellious swami rajneesh now known as OZEN rajneesh a notorious disciple of OSHO.
A deeply insightful rare and mysterious story of his journey to inspire thousands of seekers on the inner awakening towards enlightenment.